As promised, here’s Part VIII of my No~Shock~Zone series about electricity that I originally published in 2010.

If you’ve read the survey we did July 2010 in www.RVtravel.com, you know that 21% of RV owners who responded have been shocked by their vehicle. What follows is #8 in a 12-part series about basic electricity for RV users and how to protect yourself and your family from shocks and possible electrocution. In addition, this series could protect your RV’s appliances, entertainment systems and computers from going up in smoke.

This series of articles is provided as a helpful educational assist in your RV travels, and is not intended to have you circumvent an electrician. The author and RVelectricity.com will not be held liable or responsible for any injury resulting from reader error or misuse of the information contained in these articles. If you feel you have a dangerous electrical condition in your RV or at a campground, make sure to contact a qualified, licensed electrician. 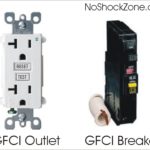 No it’s not the name of an insurance company or a European sports car, GCFI is an abbreviation for Ground Fault Circuit Interrupter or G-F-C-I. They’ve been required in many localities for electrical outlets located near sinks or the outside of your house for the last 10 years or more. The two types of GFCIs you’ll encounter are either built into the power outlet itself (left in the illustration) or inside the circuit breaker at the power panel (right in the illustration).  Both do exactly the same thing: they watch for electricity that’s going someplace it shouldn’t in an electrical Circuit by way of a Fault to Ground and then Interrupt the flow by tripping the circuit breaker. Rearrange the letters and you get G-F-C-I for Ground Fault Circuit Interrupter. That’s how the name is derived.

Why Do We Need a GFCI?

Well, if you’ve been reading along from Part I of this series, you’ll know that your heart muscle is very sensitive to electrical shock. While it takes around 8/10ths of an amp (800 milliamperes) of current to power a 100-watt light bulb, it takes less than one percent of that same current (10 to 20 milliamperes) to send your heart into fibrillation, causing death by electrocution. That’s why the NEC (National Electrical Code) now requires a special type of circuit breaker for damp locations that can tell the difference between the normal currents feeding an electrical appliance and the currents accidentally flowing through you to ground. And while a GFCI sometimes trips unexpectedly, it’s really there to save your life and the life of your appliances and other electrical components.

How Does a GFCI Work? 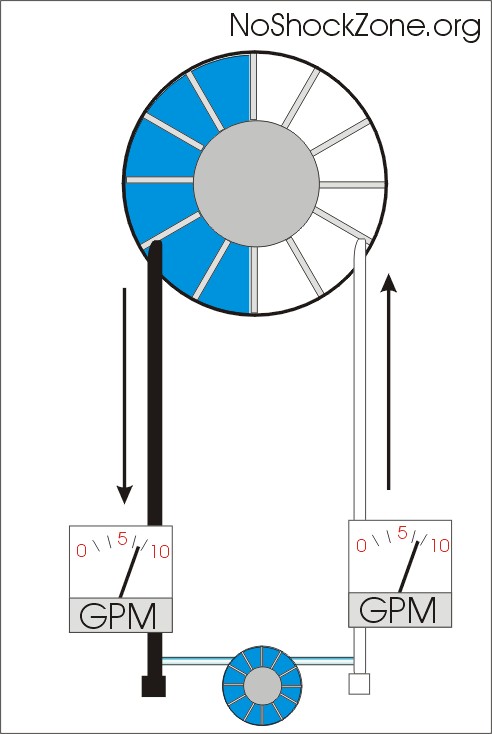 It’s a pretty ingenious system that uses a small current transformer to detect an imbalanced current flow, so let’s use our water pump analogy to review the typical current path in a standard electrical circuit.

As you can see from the illustration, we have our pump and turbine system again. And let’s imagine the pump at the top is pushing 7 Gallons Per Minute (GPM) of water current around in a circle that our little turbine at the bottom is happily using to spin and do some work.

I’ve added flow meters at the bottom left and right of the illustration so we can keep track of these currents. Now since our pipes have no leaks, the current going out of the pump from the black pipe will exactly equal the return current coming back in the white pipe. And this will be an exact balance since no water is lost in this closed loop. That is, if 7.000 GPM (Gallons Per Minute) of water are flowing out of the black pipe, then 7.000 GPM will be returning to the pump via the white pipe. There are no water losses in this perfect system. 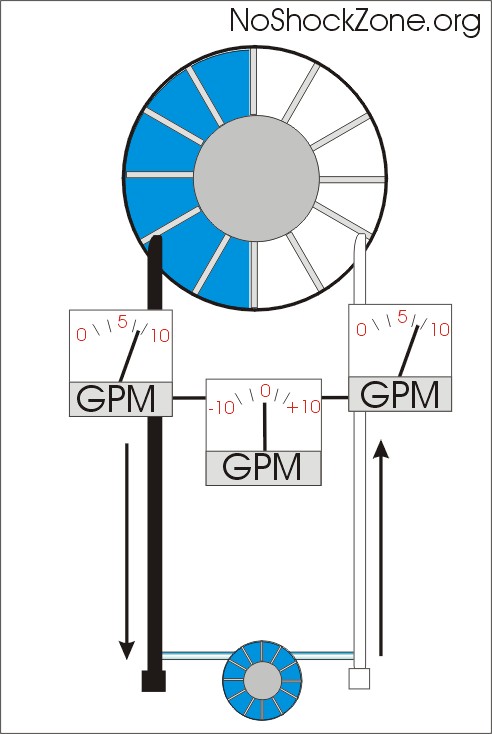 Let’s add an extra meter in this system so we can keep track of the water flow a little easier. Notice there’s now a center meter that will show you the difference in flow between the other two meters. If the left and right meters show exactly the same water flow, the center meter will show zero GPM of flow by centering its needle. 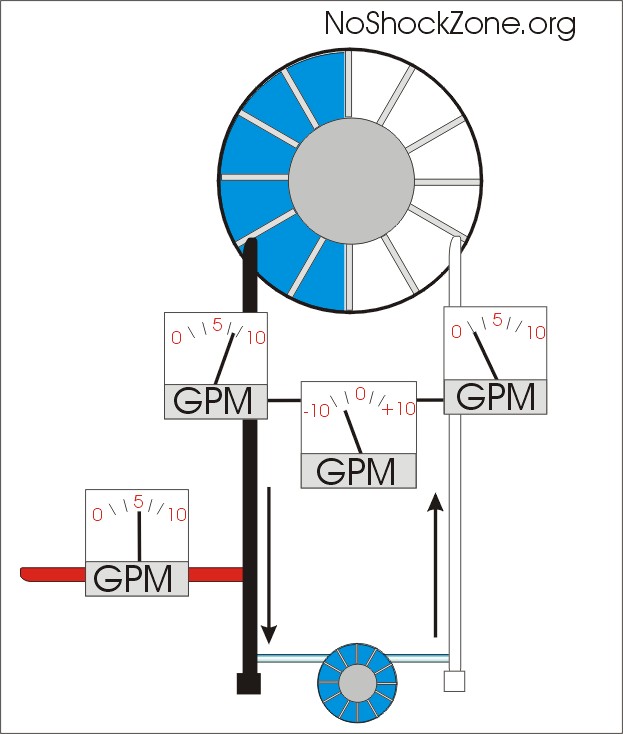 Those 5 GPM of imbalance show up in our center balance meter, which alerts us to the fact that there’s a leak somewhere in the system. Now, we really would like to know about small leaks as well, so that center meter will tell us about an imbalance down to very small drips, say less than 1/1000 of a GPM.

The same is true of our electrical circuit where we’re interested in currents in the 1/1000 of an ampere range (1 mA or 1 milliampere). That’s because just 10 to 20 milliamperes of misdirected current flow is close to the danger level for stopping your heart. 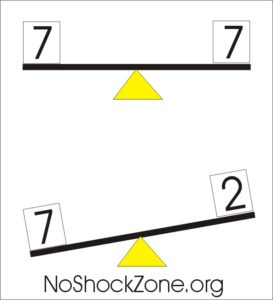 In an electrical system, a similar type of detector is used at the center of the circuit which is acting like a balance beam. So if 7 amps of current shows up on both sides of the balance, then the beam will be exactly level. However, put 7 amps of current on the left side and 2 amps of current on the right side, and that 5 amps of imbalance will tip the scales, just like the teeter totter ride you took with your dad when you were maybe 50 years younger and a 150 pounds lighter. In our GFCI circuit this is a much more sensitive balance beam that only needs 5 mA (5 milliamperes or 0.005 amps) of current imbalance to tip over rather than the 5 GPM we’ve shown in the water pump illustration. The reason for needing this much sensitivity is that our hearts can go into fibrillation from just 5 mA of AC current flow, so we would like to detect and stop that flow before it stops your heart.

Putting It All Together 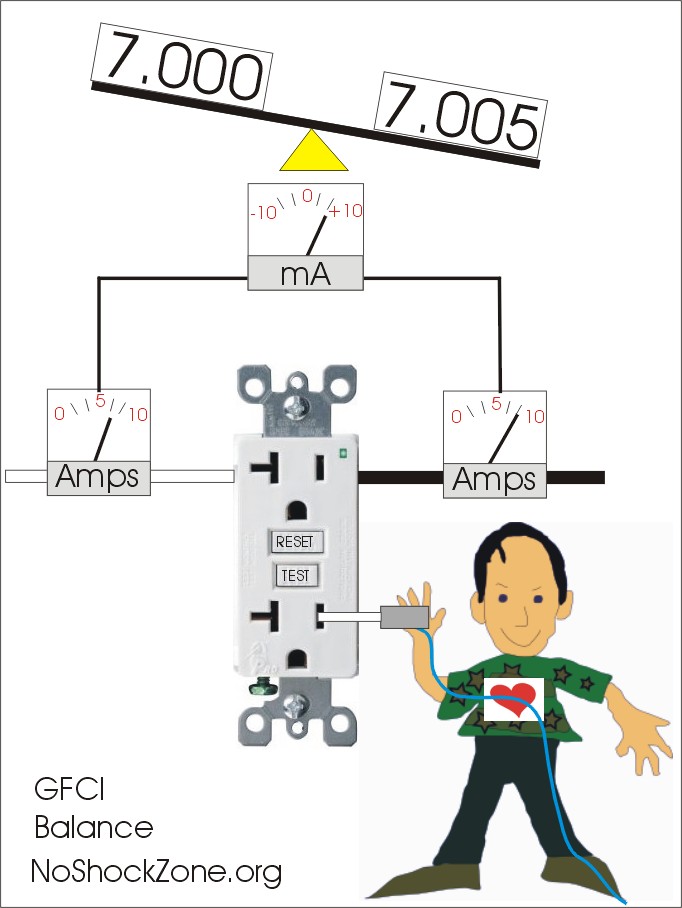 So here’s where it all comes together. Notice that our guy is unwisely touching a hot wire with a hand while his foot is in contact with the earth. And while the electrical outlet might have been supplying 7.000 amps of outgoing current to an appliance with exactly 7.000 amps of return current, there are now 7.005 amps going out and only 7.000 amps coming back. Those extra 0.005 amps of current (5 milliamperes) are taking a side trip from his hand to his foot via the heart. And the current balance circuit inside the GFCI is sensitive enough to recognize that imbalance and trip the circuit open with as little as 5 or 6 milliamperes of current flowing someplace it shouldn’t be going.

The click you hear when a GFCI trips is its spring loaded contact opening up and interrupting the current flow in the circuit before it causes electrocution. That’s the entire GFCI’s reason for existence, to save you from electrocution and keep your RV’s electrical system safe from damage. Pretty cool, eh?

All this means you should install GFCI breakers where required, and don’t remove or bypass them if there’s false “nuisance” tripping. That so-called false tripping hints there’s something else wrong in your RV electrical system that’s leaking out current to someplace it doesn’t belong. And fixing that electrical leak is important since if you get your body in the middle of the current leak it can shock or even electrocute you.

Part IX of this series will cover why false GFCI tripping occurs and how to troubleshoot for it, so come back next week. See you then.

Let’s play safe out there…. 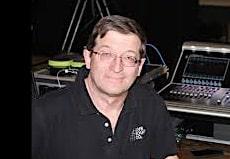 Mike Sokol is an electrical and professional sound expert with 40+ years in the industry. His excellent book RV Electrical Safety is available at Amazon.com. For more info on Mike’s qualifications as an electrical expert, click here.

Issue 9 • July 29, 2018 Brought to you as a public service by RVtravel.com. Support comes from our sponsors, advertisers and the contributions of readers, who believe that an educated RVer is a safe, happy RVer.  Subscribe to one …

This site uses Akismet to reduce spam. Learn how your comment data is processed.